Atlas in a Day – Migration 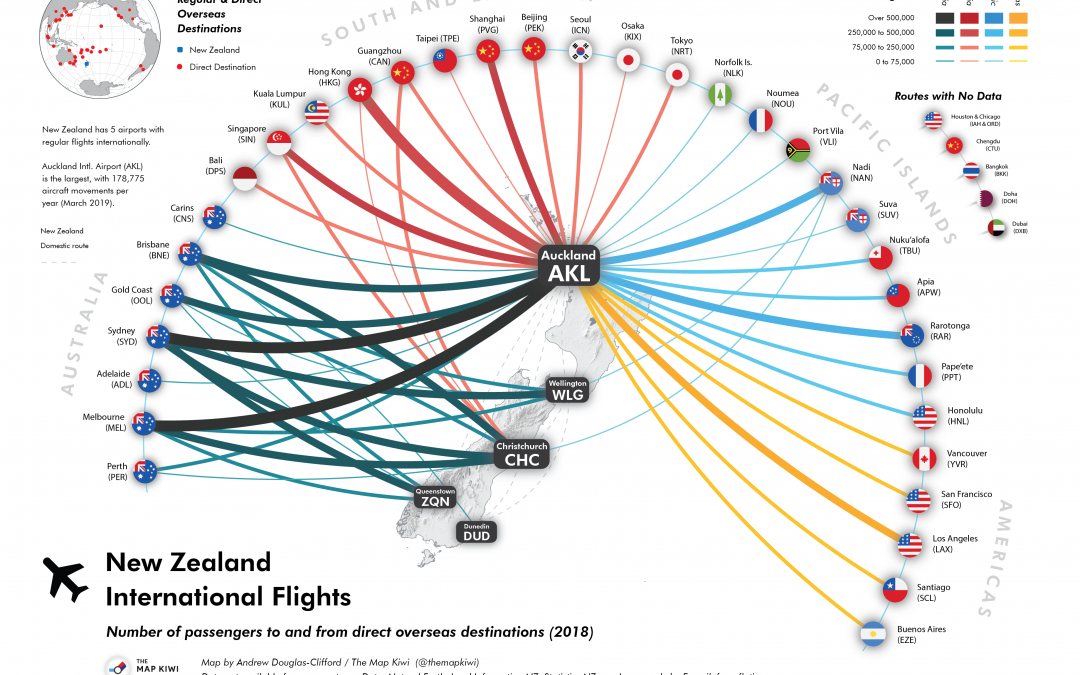 This post was written at the end of March 2020 about my experience taking part in Guerilla Cartography‘s ‘Atlas in a Day’ 24 hour event in October 2019 and how the map now relates to the current pandemic.

As a remote cartographer working from Christchurch, New Zealand, I wasn’t quite sure what theme to expect when I signed up for Atlas in a Day. I wasn’t a stranger to rapid map design. A few years ago, I did my own 7-day cartography challenge, doing a new and different map for each day of a week. For the Atlas in a Day, the mapping the topic of migration was something a bit different, and a broad one – it encompasses the movement of people, goods, birds, animals and so much more, which made narrowing down the right subject somewhat daunting for a map in a 24-hour period.

Movement of travel drew my interest. New Zealand is a fairly isolated country by international standards. The country’s main airport, Auckland Airport serves as the main hub for international flights primarily to Australia, Asia, and the Pacific Islands, with a few flights to North and South America. Some flights also take place from smaller hubs in Wellington and Christchurch. Inspired by maps from airline magazines, I settled on a network map of direct flights to and from the country to represent passenger volumes on these routes.

Because the map was more about connections rather than geography, the design process went a bit differently. Initially, I thought about drawing lines between airports geographically in GIS. However after some prototyping, I soon found this was a very messy approach – the number of overseas airports and routes distracted from the visual. Instead, I arranged overseas destinations in a semicircle indicating their general cardinal direction, resulting in more of a cartogram. While it took more time to manually place content, it was worthwhile for a cleanly presented visual that worked really well – a lot of comments I got from people afterwards were about how easy it was to quickly understand the information.

During the Atlas in a Day event back in October 2019, my aim for the map was to tell people a story about where flights and people come from as they move to and from New Zealand. It was simply a way to visualise the thread of flight routes that connect the rest of the globe. Since then, the world has changed dramatically with the spread of the COVID-19 Coronavirus, with slowing air travel dramatically impacting aviation and tourism. As I write this post, the country is in the process of closing borders to non-residents to reduce the spread of the virus, cases are increasing, and the threat of a global recession looms. In the new context we find ourselves in, to me, the map now highlights our country’s interconnected yet isolated reliance of our tourism industry on these flights. The plummeting volumes of passenger numbers the industry is currently experiencing would make for a fascinating comparison using 2020 numbers for sure.

This year it seems migration and movement of people has come into even sharper focus, and in hindsight was an apt topic for the topic of Atlas in a Day. Despite being a remote contributor, I really enjoyed participating and being part of the greater collective of migration themed maps and cartographers that made up the finished product, as well as the chance to try out some new perspectives and ideas!

If this sounds interesting, another remote ‘Atlas in a Day’ event is being held on May 15-16 2020! Click here for more information.