Blog Update January 2018: The year that was, and looking ahead

It’s been several months since my last Map Kiwi blog update, so what better time to do it again at the beginning of a new year!

2017 was a busy year for me, filled with many projects and maps. It was the year I finally managed to finish my Masters in Geographic Information Science (MGIS) thesis last April. It was a stressful experience pushing it over the finishing line, but graduating the degree with first class honours was better than I could have hoped. For those with an interest in crowdsourcing and public transport, my thesis on ‘Gaining Insights into Public Transport using Crowdsourced Information’ is available here (warning, it’s lengthy!).

It was then I decided to pursue work as a freelancer instead of the traditional route of an office job in the GIS industry coming out of University. Having a well-known brand that people knew me by and a web store already selling maps helped with the decision, but it was the chance to take a more flexible approach and work on the kind of projects I enjoyed the most. Cartography is something that’s fairly specialist in New Zealand with not a lot of work positions in demand, so being able to further develop my skills through my own projects was the best way to pursue the work I’m passionate about. Of course, I continue to keep my eye out for work positions that interest me (don’t hesitate to ask if you are looking for someone with my skills!)

Some of my highlights during 2017 include the 7 Day Cartography Challenge, which I’ve previously written about. Not only did it provide a test of time pressure and cartographic skills, it produced some awesome maps which many of you loved! Participating in the GovHack Civic Hackathon in July was also an awesome experience, my team member Steve Ford wrote about the experience on the Interpret blog. Towards the end of the year, making a debut with my first retail partner Shopology in Christchurch’s Art Centre selling my work was a new experience, and yet another surprise was the popularity of the ‘Nobody Lives Here’ map in social media and the news articles that followed. I was even interviewed for a profile piece in Stuff.co.nz’s The Press Newspaper which you can read here. The article as it appeared in the newspaper is below: 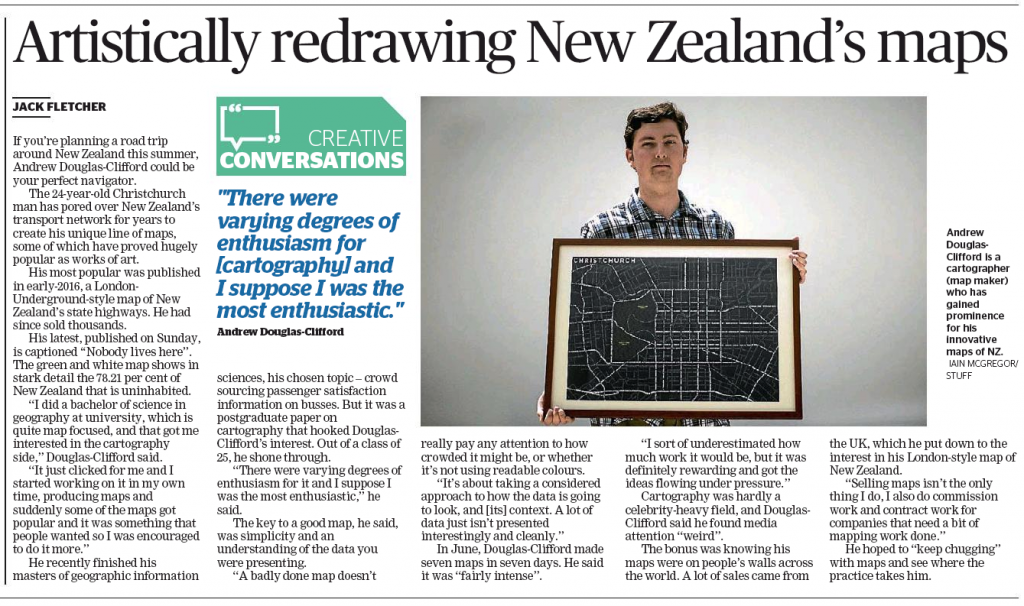 Looking to 2018, I hope to dive deeper into a greater number of interesting freelance projects whenever I can, and expand The Map Kiwi further still. I’ve got a couple of interesting personal map projects in the pipeline over the next few months, with the aim of learning new cartographic skills along the way (pinakographos, your awesome tutorials keep making this list longer!). I’d like to get into more interactive maps as well using tools like Leaflet for web mapping. Something I’d certainly like to do again is a second Cartography Challenge, so keep an eye out for that and feel free to send in your ideas for what I should create for it.

Wishing everyone the best for the coming year ahead. Don’t hesitate to get in touch or catch me at a local GIS event!